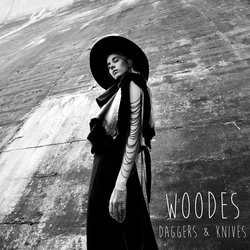 Acclaimed Australian artist/producer Woodes releases her new single 'Daggers & Knives', the first taste of her debut solo EP to be released mid year. Woodes has previously been in the spotlight for her collaborative EP with producer Elkkle, garnering instantaneous praise across the radio and blog-o-sphere in Australia as well as internationally.

Her previous singles, 'Muddy', 'Cocoon' were added to community radio across Australia, as well as being a favourite across the triple j stations. More recently her track 'Flash Mob' was revealed as one of the top 25 songs played in 2015 across triple j unearthed radio.

Woodes has been a featured artist with Spotify Australia and named the coveted unsigned artist of the week with both FBi Radio and triple j unearthed. She was named one of the stand out acts at BIGSOUND 2015 and in 2016, Woodes has been chosen to lead the Aussie charge to Toronto for Canadian Music Week.

Woodes has recently supported the likes of Mansionair, East and Andrei Eremin and is currently collaborating with local and international artists including electronic act Set Mo, Golden Vessel and Lanks. Woodes has her eyes set on 2016 with her first solo EP release.


The new single 'Daggers and Knives' from Woodes steps out on her own creating a hauntingly beautiful, powerful track, sucking you in from the first listen. Combining her intricate and textured production with her compelling lyrics, Woodes proves she is the 'Queen of this town'.