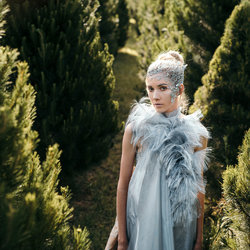 After writing her first song at age 11, it was clear that Elle Graham was going to make a career in music. Growing up in tropical North Queensland, Graham used her upbringing as inspiration; pairing it with training garnered at the Victorian College of the Arts to launch her solo project WOODES.

Upon release of her second EP ‘Golden Hour’ in early 2018, Woodes became an in-demand live act; supporting international heavyweights Asgier, BØRNS and Sylvan Esso, as well as crossing the country twice for her headline performances. The EP’s opener ‘Hunger’ was also handpicked by Netflix as the official trailer music for their debut Australian series Tidelands.

2018 also saw Woodes perform at Splendour In The Grass, where she debuted her most recent single ‘Change My Mind'. The single went on to feature in 15 countries New Music Friday playlists including The UK. Change My Mind was Woodes 5th single added to high rotation on triple j.

Graham has also been a much sought-after feature songwriter and vocalist, recently collaborating with influential artists such as Cosmo’s Midnight, Golden Vessel and Set Mo. Her song ‘I Belong Here’ with the latter achieved ARIA Gold status.


'Canada' employs swelling drums and subdued synths to capture the Christmas season. Woodes collaborated on 'Canada' with long time friend LANKS, telling the story of a close family friend. She explains, "Each year, with passing and reflection, Christmas holds a sadness and a beautiful light. I was thinking a lot about patterns in family when I wrote Canada."

Other tracks by Woodes: This is My Year
%