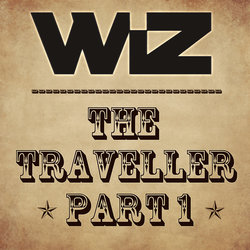 Active since the early nineties, Wizdm is a legend in the Australian hip-hop scene. Since 1983 he has been active as a b-boy, and then graduated to DJ work in the late 80s, before commencing his career as an MC as one half of the Sydney-based crew Brethren in the early nineties. This will be Wizdm’s fifth foray into his own solo projects, after Unrelenting (2009), Set The Tone EP (2013), The Sacrifice (2013) and The Return (2014), Wizdm is returning once more to give us the street-level view and deliver his own life-learned wisdom.

The Traveller Part 1 is a progressively rolling, momentum-building advance in which Wizdm underpins his lyrical attack with a light-footed spaghetti western selection of zen-like flute drifts. It keeps the desert town motif as a light, dancing accompaniment to Wizdm’s uncompromisingly articulate, no-nonsense commentary on the dissatisfaction with the status quo, and the search to liberate oneself from it to act with a little more integrity. It implies a running connection to spirituality, in the sense that figuring out how to act authentically and live by your own rules is always preferable to following the herd.


The Journal opines about the fatigue of keeping up with the pack. It tells us that being ‘sick and tired of finding life in ginseng’ is a fool’s race devoid of real connection, learning to let go and speak truthfully from the heart will let you reveal your spiritual vibe.

Other tracks by Wizdm: Shoulder to Shoulder
%