Will Day - This Country Life 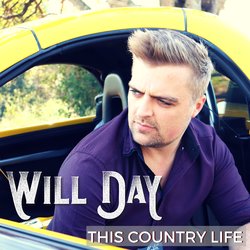 Brisbane-based country artist Will Day has spent much of the last few years travelling Australia’s south-east coast. But his musical roots took hold in the small town of Goondiwindi, five hours south of where he now lives. His early life in a small town inspired songs such as ‘Seasons’, which is the award-winning first single off his debut EP released in late 2016. Will Day’s latest release ‘This Country Life’ is an upbeat and catchy track about leaving the city behind.

This modern-day singer songwriter has had an exciting start to his career and achieved a swag of impressive milestones. In 2017 Will went on a successful 10-day New Zealand tour, headlined the Goondiwindi BnS with record crowds and was announced as a finalist in three categories for the current ICMA awards. His latest achievement is winning the Male Rising Star category at this year's Southern Stars Australian Independent Country Music awards.

Will Day has had the pleasure of working with such artists as Allan Caswell, who says, “Audiences love Will … and with his all round performing skills … it isn’t surprising. His original songs are thoughtful, well crafted and polished … Will Day is the whole package.”


‘This Country Life’ is an upbeat country rock track about escaping the city for the weekend, hitting the open road and getting a taste of a country life. This track was produced and recorded by Benjy Pocock at Vibetone Studios and co-written with Troy Kemp, Col Finley and Damien Baguley.