What So Not & Diablo - OOGAHDAM! 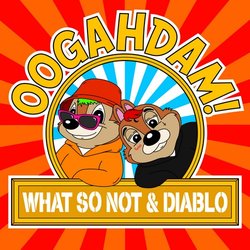 “For me 2019 is about being free and spontaneous,” says Chris Emerson , the Australian artist, producer and DJ behind What So Not. “It’s getting back to: This feels right for this moment. Let’s put it out in the world now.”

It’s a big change for the artist who last year made his biggest, boldest statement yet with the release of Not All the Beautiful Things, the three-years-in-the-making debut artist album that reaffirmed What So Not’s place as one of the most ambitious, visionary producers in the game. Featuring collaborations with Skrillex, Slumberjack, San Holo, Michael Christmas and legendary “Africa” rockers Toto, the album spawned the hit “Be OK Again” featuring Silverchair frontman Daniel Johns and earned praise from all corners, including NYLON (“a fully packaged, uncompromised artistic vision”) and YourEDM (“hits with power and doesn’t let up”). What So Not supported the album with a yearlong 150 show tour through 45 countries that included stops at Ultra, Bonnaroo and Lollapalooza South America, all accompanied by the colossal chrome horse on monster truck wheels that graced the album’s cover.

That new spirit is perfectly encapsulated in What So Not’s first single of 2019, “We Can Be Friends,”


OOGAHDAM! is a collaboration between What So Not and Diablo, it's a super fast-paced dance track which starts off with an infectious vocal then quickly transitions to a more glitchy, electronic beat.