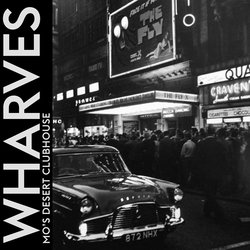 WHARVES is an indie rock band based in Lennox Head on the far north coast of NSW Australia. Members Matt Collins (Vocals, Guitar), Mike Watson (Guitar), Scott Finch (Bass) and Fraser Perrott (Drums) formed only just over 2 years ago but have firmly cemented themselves as a highly popular member of the Australian indie scene.

In 2018 WHARVES waltz right back into the spotlight with new single ‘Mo’s Desert Clubhouse’, a jaunty belter with ferocious guitars and spooky vocals. The second single off their debut EP ‘Sooner or Later’, which is due out Friday 5th October, WHARVES’ latest offering found its charm with creative input from producer and mixer Steven Schram (San Cisco, Tiny Little Houses).


The music for this track came from our Sapphire Sessions in March 2018. Where stayed in a beautiful house near the beach in Coffs Harbour and jammed for 3 days straight.

The lyrics were inspired by a roadtrip I took in May with the part owner of the Gold Coast arts venue "Mo's Desert Clubhouse".