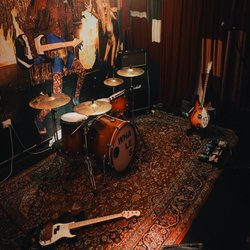 Melbourne three-piece Whales is an Alternative Rock band formed by musical mates over loose jams and cold beers. Following the split of their previous UK-based band and relocation back to Melbourne, Phil Peers (Vocals & Guitar) and Shannon Radic (Drums) had a casual afternoon session and found that the chemistry was still palpable. The pair decided to cultivate a new musical project, which was soon completed by Darren Matthews (Bass). Since forming in mid-2015, the trio have been honing and refining the wall-of-sound that is Whales. After performing a cluster of shows around Melbourne, Whales spent time with Daniel Caswell at Red Door Sounds (The Living End, Children Collide, Vance Joy), recording three tracks which showcase the band’s ability to combine rugged musicality, atmosphere and big choruses.

Equal parts British Invasion, Punk and Britpop, they blend melody and power, to create 3 minute anthems that will stay with you much longer.

Other tracks by Whales: Old Jeans
%