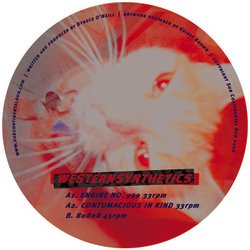 Using his unique blend of Acid, Dub, Techno, and Psychedelia Westernsynthetics (aka Rhyece O'Neill) is making waves in the worldwide Dubstep community with his tracks and live performances.

Nominated in the top 20 Instrumental genre of the 29th Australian Songwriting Contest check out Westernsynthetics on the Sub Continental Dub label and his debut 12" and digital release Engine No 999.


Engine No. 999 by Westernsynthetics was nominated in the top 20 Instrumental genre of the 29th Australian Songwriting Contest, received rotation on FBi, spins on Triple J and plays around the world on Internet radio, check out this solid debut release from Sydney's Sub Continental Dub label and artist Westernsynthetics.

Other tracks by Westernsynthetics: Contumacious In Kind  -  80808
%