We Lost The Sea - Barhan Charge 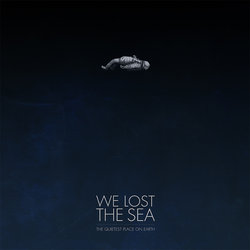 We Lost The Sea are an exciting prospect for the Australian underground heavy music scene. They combine brutal riffs with delicate ambient passages and startling left-turns within their ambitious songwriting.

Their post-metal influences are worn on their sleeve, but the songwriting and experimentation within the genre stand out as truly unique amongst the heavy music underground.

Whilst possessing supreme musicianship, they eschew showmanship in favour of retrained and climactic builds, often over the course of an entire song.

We Lost The Sea have spent 2012 busily playing shows and sharing stages with acts including Rosetta (US), Dumbsaint, Solkyri and Adrift For Days. With the release of their album, 2013 promises to be even busier for this 7-piece lineup with a wall of sound.


We Lost The Sea showcase their epic post-metal sound on 'Barkhan Charge'.

The track builds from gentle ambience into a full-blown aural assault of climactic proportions. Guttaral screams and slow-moving walls of guitars combine to render the ambient monolith asunder.


Other tracks by We Lost The Sea: Nuclear City
%