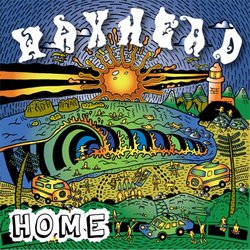 WAXHEAD is a collective of four tropical, white and adventure hungry surf lords. Fascinated by black music, the epic rock of the late 60’s to early 70’s and the post punk new wave of the late 70’s to early 80’s. Drawing from their life in the waves and on the margins of the mainstream, WAXHEAD is dirty seaweed rock with a filthy lust for cheeky sounds. Stoner meets grunge then slapped in the face by New Wave. Comprising of Finny (guitar), Beggson (Drums), Moffo (bass) and Froggy (guitar and vox) These four hedgy bastards are poised for the release of their debut EP Home with their biggest Australian tour to date. In the short two years spent together WAXHEAD have played with the likes of; Thee Oh Sees, Kingswood, Dune Rats and invited to join in on their hometown festivities, playing at Falls Festival (Byron Bay) and the Byron Bay Blues Festival. WAXHEAD have toured internationally twice through Indonesia and have just returned from their first and hugely sucessful tour of Japan. With their heads still full of Saki and Arigato’s their new single Home is their most cracking tune to date and due to drop in the coming weeks.


There is something both mature and gritty in the expansion of WAXHEAD’s sound. The sound takes elements from the early Aussie rock scene and slaps them together with chunks of Pink Floyd and Talking Heads while retaining something that is altogether unique and individual.