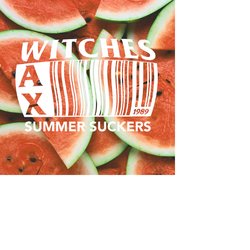 "Summer Suckers" follows hot on the heels of releases from Wax Witches' debut 2013 album "Celebrity Beatings", which was born out of a particular set of circumstances - bored at home alone between Bleeding Knees Club tours, Wall taught himself to record and came up with a collection of bratty lo-fi songs that reflected his formative influences of Cali punks The Descendents and Black Flag.

After great response to the album and encouragement from the American label to make another record right away, Wall saw an opportunity to expand the Wax Witches universe with a bigger and brighter set of sounds, and moved his home base to New York. While still nodding to his garage-psych roots, the impetus for this new Wax Witches album was somewhat different. He says "Moving to New York was a scary but exciting prospect. It's a cliché but true: being in a big new city with so much rad stuff going on right on my doorstep gave me the energy and inspiration to make a much more ambitious Wax Witches album."


A feel-good summer song. Wax Witches love the sun and the beach. It’s about being a sucker for the summer, going on road trips. "I just wanted to write a song that kids who just got their first car could listen to while they drive around with their friends"