Watling & Bates - I Got Gold 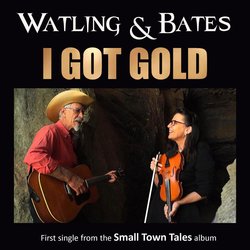 Kym Watling & Geoffrey Bates are songwriters from the Unumgar NSW.

After 16 years together, they have a suitcase full of stories of small towns, long highways, soft hearts, and troubles left behind.

Fiddle, banjo, and guitar kick up dust on a country road in full skirt, straw hat, and sturdy boots.


I GOT GOLD is the first radio single release from the SMALL TOWN TALES album by WATLING & BATES. The song finds simple treasure amongst life's gravel and stone. The Dobro of Thor Phillips provides a sparking highlight to this deeply emotive work.