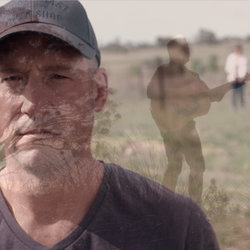 Australian Country singer/songwriter Warren Derwent was judged winner of the 1992 Toyota Star Maker Quest in Tamworth NSW. Warren released the hit singles Back of Beyond and Eyes of Love, and received a Best New Talent nomination at the 1993 Australian Country Music Awards. He currently performs around Canberra, and continues to write and record. Warren released his debut album Southern Sky in 2016, and the album is available on iTunes, Spotify, YouTube and Amazon etc.

In September 2019, Warren announced the release of his new single and official Music Video "Staring at the Sky”, which is also available now on iTunes, Spotify, YouTube and Amazon etc.

The track, which originally appeared on his 2016 album Southern Sky, has been re-released as a single to coincide with the release of the latest music video.


Performed by Warren Derwent and co-written with Paul Fisher (Fisher/Derwent), Staring at the Sky is a song about the effects of drought in Australia. It's hard to imagine what it's like for so many Australian families struggling to survive one of the worst droughts in living memory, and Staring at the Sky was conceived in imagining.