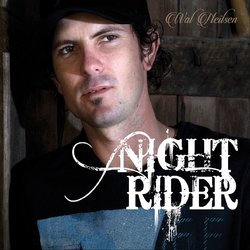 Wal Neilsen's songs paint a picture of desolation- the open country road, outlaws and one- horse towns-not surprising considering that's where Wal comes from the small town of Maryborough, Queensland. It was here that Neilsen first picked up a guitar, then found himself humming the sketches of original songs while working on his family's sugar cane and cattle farm, chording them out when the day's work was done.

This talent blossomed in adolescence when Wal began writing more and more of his own material. The result is dozens of beautiful songs born from his wild imagination. This sound has struck a chord with both fans and established music industry professionals alike, evidenced by his finals placement in the 2013 Hervey Bay Unplugged competition and his first place prize in the 2014 Voice of Urban, a the Urban Country Music Festival.

Wal is due to release his 11 Track debut album Night Rider, June 15. Produced and recorded by Rob Mackay at Pacific International Music in Hervey Bay. Considering his career is only just beginning, the future for this star is certainly bright.