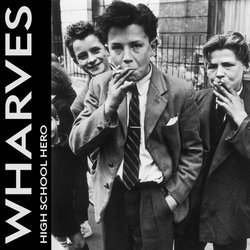 Hailing from Lennox Head, indie-rock quarter WHARVES have been making waves nationally in their short time together since forming in 2016.

Last year, WHARVES took out the Triple J Unearthed spot to open Splendour In The Grass, and shortly after signed with the renowned 123 Agency. The following months saw the band join back-to-back tours, including supports alongside the likes of Wolfmother, Dear Seattle, Kingswood, Ocean Alley, The Vanns, Jack River, Bad Pony, and Polish Club. Adding to their impressive resume were slots at festivals such as Falls Festival, BIGSOUND, Festival of the Sun, Byron Guitar Fest, and Beach Sounds Festival.

With a powerful and highly skilled live act, and a quickly developing discography of post-punk tunes including acclaimed singles ‘Man You Want Me To Be’ and ‘Love Decide’, the quartet are gearing up for an exciting year, kicking off with brand new single ‘High School Hero’.


According to the band, ‘High School Hero’ signifies the breaking of chains for the beast that is WHARVES, marking a new direction for the quartet where anything is now possible.