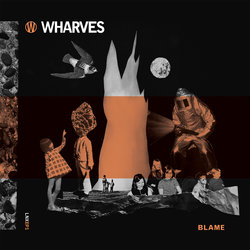 WHARVES new single ‘BLAME’ will be out on 2 August 2019. The band's reputation for putting on an incredibly powerful and energetic live show has seen them sell out shows in capital cities across Australia. WHARVES have supported bands such as Ocean Alley, Wolfmother, Rolling Blackouts Coastal Fever, The Living End, Polish Club, Kingswood and more. They have played major music Festivals including Falls Festival, Festival of the Sun, and Bigsound Festival. In 2017 triple j radio awarded WHARVES the “Unearthed” spot to open Splendour in the Grass.

WHARVES had a breakthrough in the USA market with their single ‘Man You Want Me to Be’ debuting at #21 on the SubModern Single Charts in 2018.

WHARVES will be heading to Europe and the UK to support DZ Deathrays and Planet on a huge 14 stop, 5 nation tour in September/October 2019 before heading back to Australia for a headline tour.


BLAME came out of a jam with the working title 'Dad Rock' as it reminded us of The War on Drugs.

BLAME is a cathartic song about accepting that bad things happen in life and that you need to accept responsibility for your own actions rather than blaming the world around you. It has quickly became a crowd favourite.