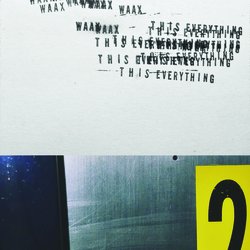 An early reputation as ‘a live band to be reckoned with’ dictated WAAX's path as a punk-infused rock band with the “utterly terrifying” Marie DeVita fronting.
Debut ‘Wisdom Teeth’ earned them a spot on the BIGSOUND triple j Unearthed stage. The furious ‘I For An Eye’ came next, and was promptly added to triple j rotation, while the band played shows - LOTS of shows. Support slots with Kingswood, The Delta Riggs, Ecca Vandal, Emperors, Stonefield, Guitarwolf (Japan), UPSET (ex- Vivian Girls, Best Coast and Hole members) and White Lung (Canada).
WAAX tore up Maroochy Music & Visual Arts Festival, Festival of the Sun and The Blurst of Times and will soon support Kim Gordon (Sonic Youth). All of this in addition to their own sold out headline shows.
Last year, they boldly released surprise debut EP 'Holy Sick'. Flip to now – 2016 – to find a wiser WAAX; a band that hunkered down to find their own voice and are finally ready to share it. Their forthcoming second EP is completed, but first their new single 'This Everything', which marks a new phase and introduces the theme of their upcoming EP.


“It’s a song about being overwhelmed by everything at once but not being able to move – or at the most - move backwards. I felt myself slipping into the dark places I had been in the past. I was isolating myself socially and felt like I didn’t belong anywhere"