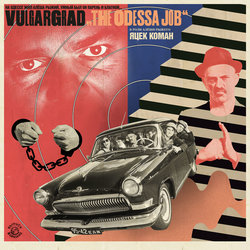 ulgarGrad arose in Melbourne in late 2004 out of a collaboration between some of Australia’s best musicians in underground ethnic styles. Since that time they have been stalwarts of Australia’s live music and festival scene and amassed an incredibly dedicated fanbase, proving that what Australian audiences really seem to need is a wild night of old-fashioned Russian criminality. After all, if Russia and Australia have anything in common, it’s convicts.

Jacek Koman (whose acting credits include Children of Men, Moulin Rouge, Romulus My Father, Australia and most recently Tidelands, Jack Irish, Rake and Mustangs FC) is the genial but vengeful lead singer who roars with the voice of a man betrayed, and he is backed by a gang of Australia's most illustrious ex-cons drawn from bands such as The Blue Grassy Knoll, Zulya and the Children of the Underground, Croque Monsieur, Bombay Royale, and The Puta Madre Brothers. The line-up is guitar, drums, trombone, trumpet, accordion, and watch out for the largest, most triangular instrument of them all, the mighty contrabass balalaika.

VulgarGrad are only likely to have a handful of Australian shows in 2019, so make sure you catch them before they get away...


The most intense and serious of all VulgarGrad’s songs, this was stolen from the great Soviet-era bard, Vladimir Vysotsky. The story is told from the dramatic perspective of wolves in the forest hunted by cruel men with guns, and the only escape is to go “beyond the red flags”. Another brutal brass arrangement with lead singer Jacek in roaring form.

Other tracks by VulgarGrad: Alyosha  -  The Ballad of an Emperor
%