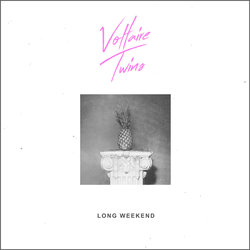 The last three years have been a whirlwind of touring for Voltaire Twins, having travelled overseas to play the likes of SXSW as well as national tours with Born Ruffians and San Cisco, and supports for Mystery Jets, Ball Park Music, Dappled Cities, Cub Sport and Art vs Science.

Since moving to Melbourne and working with producer Anna Laverty (Cut Copy, New Gods) and mixer Steven Schram (San Cisco, Little Red), the band have been squirreled away in a glittery synth cave, writing and recording a deep, cosmic thickshake of 70s disco, 80s pop and 90s beats, with ‘Long Weekend’ serving as the first taste of the fruits of their musical labour.


The sunny yet dark track is, according to Jaymes, hyper-autobiographical, “when we started to write the album, we decided to make it as autobiographical as possible, so this song is full of fragments and quotes from previous relationships.”