Void Of Vision - If Only 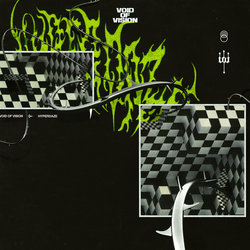 'Hyperdaze' is the sophomore record from Melbourne metalcore four-piece Void Of Vision.

“Pure hatred, self-loathing and nihilism,” are themes that unravel throughout this record, explains Void Of Vision lead vocalist Jack Bergin. Though there's no positivity or light to be drawn from the album, Bergin asserts that there's a lot to unpack. 'Hyperdaze' is an invitation into the depths of his world, with its creation process offering a steep exercise in catharsis for him as an individual and an artist. The result is a belting 11-track release that laces raw anger and vulnerability between superior musicianship.

Building on the momentum of their debut album 'Children Of Chrome', and their more recent outputs, 2017's 'Disturbia' EP and 2018 single 'Kill All My Friends', Void of Vision have been consistently stretching their touring muscles. With slots at Good Things, UNIFY and Halloween Hysteria, extensive headlining across Australia, European visits and a recently announced support slot alongside Northlane, the band have been busy showcasing their live assault.

Now with their heaviest and most refined assault on hand, the Hyperdaze era is set to see Void Of Vision at their most tenacious and hell bent yet.


'If Only' is taken from Void Of Vision's record 'Hyperdaze', due September 13, 2019. Though musically 'If Only' marks one of the lighter moments on 'Hyperdaze', it hasn't been spared in the way of bleak themes and lyrics (see the lines like “don’t pity me, I’m dead already” and "this overwhelming misfortune, let it consume you, let this destroy you").