Vitabeats - Flowers In The Wilderness 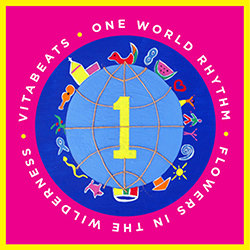 Andrew and Lissa Barnum began their partnership in the 80’s with the Vitabeats. This led to a number 1 video and Australian top 5 singles: ‘Boom Box’ and ‘Audrey’. Inspired by the encouraging support of the iTunes release of the original ‘Spot The Spanner album the duo have unearthed two ‘never released singles’. Recorded back in the day with Producer Joe Wissert (Boz Scaggs/Earth, Wind & Fire) and legendary Aus hitmaker Engineer David Hemming.

They’ve paired these songs up with some new tracks produced by Boris Hunt for digital release. The first single is the globally inspired ‘One World Rhythm’ and ‘Flowers in the Wilderness.’

These new tracks are indicative of a shift in Vitabeats music styles from “Electro-Pop’ to a more organic, acoustically based ‘World-Pop’ that is underpinned by Lissa’s Mexican background and their newfound global audience. The renewed interest in the original album ‘Spot the Spanner’ has also spurred them on to record a re-imagined Vitabeats EP based on their favourite tunes from the album.

Andrew and Lissa are teaming up with recent UK arrival producer/engineer Adrian Breakspear (Goldfrapp). The three will be working together in the coming months. Look for more releases soon.


A new tune recorded by the Vitabeats team of Andrew and Lissa Barnum. It maintains the pop sensibilities and features a wonderful blend of their voices.

Other tracks by Vitabeats: One World Rhythm
%