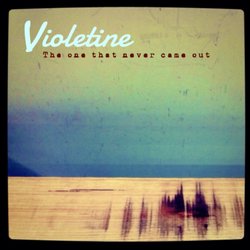 Glenn Lewis is the bass player for ‘Mick Harvey’s Band’, Andy Strachan plays drums for ‘The Living End’, Sean Miljoen fronts ‘She’s The Driver’, But wind the clock back to April 2000 and these three Melbourne musicians had just completed recording the follow up to Violetine’s critically acclaimed debut album ‘Small Speaker Joyland’. They headlined The St.Kilda Festival, did a show with Magic Dirt and then disappeared………. Record company and internal turmoil saw that the album was never released, but flash forward to now and the band has just been coaxed out of retirement, completed a national tour with ‘The Superjesus’ to great reviews and prompted the release of ‘The One That Never Came Out’, This album finds a mixture of ‘Lindsay Gravina' mastered desk mixes from the original album sessions, paired up with strong demo versions of the songs that were to make up Violetine’s second album. Producers include Wayne Connolly & Paul McKercher plus a vocal guest appearance from Rebecca Barnard on ‘Clear The Dust’. There’s nothing more authentic than a 90’s band releasing a new album that was recorded in the late 90’s!


New Wave is taken from the never before released album, ironically titled 'The One That Never Came Out', which was released on October 25. This album was the followup to their classic 'Small Speaker Joyland', but due to record company politics and internal issues was never released...until now. This song - New Wave - was too good not to release.