Vince The Kid - Rush The Love 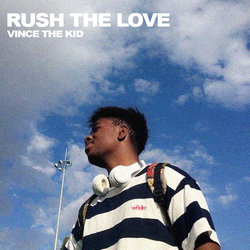 Noting names like Nas, J Cole, Kendrick Lamar, Tyler the Creator, Joey Badass as inspirations, alongside artists such as Frank Ocean, Jorja Smith, it’s no surprise that this young talent’s music carries such a mature and refined sound. Vince says about his songwriting process “for me it’s whatever comes first, sometimes I’ll catch inspiration at random times, and it might be a melody or a flow or a sick bar but generally it varies”.

Fluent in Swahili which is mostly spoken in Central African countries, young Vince used music as an avenue to express his emotions and connect with other like-minded artists. His first ever song on Soundcloud secured 3500 views and since then, he has collaborated with Kian after hooking up on Snapchat in late 2017. Their mutual respect and love of music culminated in their killer tune “Too Far Gone”, with Triple j’s Richard Kingsmill giving it 4.5 stars & saying “The simple honesty - and that sparse production to match - makes this a winner from start to end”.


His debut single “Rush The Love” blends old school R&B, Hip-Hop and Pop with classic word play. “The song is written about a girl I had “feelings” for that just didn’t feel the same in the end and we just drifted apart” says Vince on the song meaning.