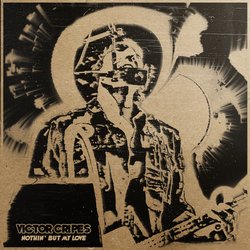 VICTOR CRIPES DELIVERS A DISTINCTIVE DIRTY BLUES SOUND ​which echoes the styles of generations of blues music - from the blues masters of yester-year to the British / American blues revival of the 1960’s. A partnership of Australian easy groove, American thump and British tube overdrive, with an original modern twist.

With a unique 'one-man-does-everything' approach, energetic street performances across Australia, as well as frequent appearances on Melbourne's exclusive Bourke st Mall and at staple venues on the Aussie east coast, Cripes has opened the stage for some of Australia's most notable blues/roots acts including ARIA Award winning groups Ash Grunwald, Collard's Greens & Gravy, and international touring acts Bob Log III, Matt Walker, and many others.

Recent times has seen many miles along the highways following the release of the 'Victor Cripes at Studio Schizoid' (2019). Previous releases include 'The Grave of Kitty Cane' (2018) and ‘Leg it! We’ve been rumbled' (2015) featuring the track ‘You’d Better Get Your Skates on Sunshine Blues’ which made the top 5 on the Australian national AMRAP charts top 5 alongside other Aussie export acts such as The Waifs and Gurrumul.


Drawing inspiration from classic vintage recordings from 1960's/70's psychedelia and blues/folk revival, engineer Julian Ross-Clarke has a track-record of releasing quality, raw, honest recordings and managed to coax a classic warm-growl from Cripes' unique street performance rig and rustic instruments. 'Nothin' But My Love' is balanced on a knifes-edge with real-life grit on one side and vivid-surreal-dreaming on the other.