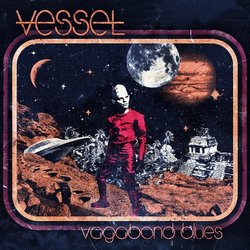 Unearthed from the goldfields of Bendigo, Australia, Vessel is more than just another rock group from the land down under. Having kicked off as a solo project from guitarist Jordan Forster, Vessel started out with a variety of guest musicians and vocalists. Though it took years to put together his core lineup, eventually Forster paired with the husky voice of Mason Matheson to front his band. Since completing their latest album "Vagabond Blues"with the help of more guest musicians, Matheson has picked up a bass guitar and brought in the live drum work of old friend Hayden Collins. Thus united, Vessel have greater momentum than ever before.

Inspired from his travels around the world, Forster has used his broad experiences to fuel lyrics about global issues like racism, conservative governments, organised religion and climate policy. His international perspective has gotten the attention of Blabbermouth, gained praise from local institution The Hard Rock Show and even placed Vessel in the revered Doomed & Stoned in Australia compilation.

The band fuses the influences of everyone from The Sword to Uncle Acid by way of Thin Lizzy and Monster Magnet.


Written while living in the UK and travelling on the island of Cyprus, lead songwriter Forster has seen many corners of the globe. Often feeling stuck between coming and going, with a lust for adventure and an equally powerful bond for his homeland, Forster captures this heart tearing emotion in the fast paced fuzz rock track

Other tracks by Vessel: Twenty Twenty  -  Dark in the Light
%