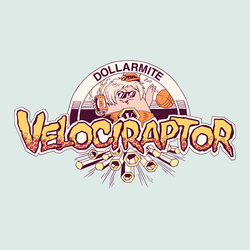 They started as a 3 piece w/ Shane Parsons (DZ Deathrays), Simon Ridley (DZ Deathrays) and Jeremy Neale. They quickly recruited a bunch of local legends to become a 7 piece. Then a 12 piece. Then released their debut EP in September of 2010. Followed up with Mini-LP ‘The World Warriors’ in September of 2012. They had an adventure to the UK and Europe in 2013 where 3 members decided to stay on and become the Velociraptor Euro Division.

They countered this alteration of roster by adding 2 more members locally. Given that they frequently include their manager Jesse Barbera in their press photos they’re now a team of approximately 15 but they’ll generally tour with 8. Occasionally members will have other pressing social engagements or commitments with other bands you see. More often than not Velociraptor just don’t have the money.


The brand new single 'Dollarmite', as premiered on triple j's Good Nights. It's about growing up in an unstable home environment and its direct effect on early adulthood. It references the golden times of the Commonwealth Bank's Dollarmite scheme and the glory of the Sega Megadrive.