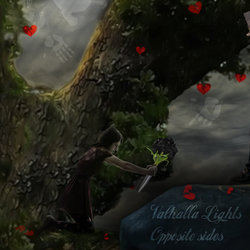 VL encapsulates volume, with a live show punishing the stage with an intense wall of melodic sound.

2015 saw the release of VL’s debut album, Krypton which was created posthumously using the pre-production vocal recordings of the band’s first vocalist, Phoebe Black, who had tragically passed away just days before the band was to enter the studio.

2015 also saw the release of the Documentary “Shades of Black – the Valhalla Lights Story” which paid tribute to Phoebe, & documented the process of reverse engineering an album (starting with the vocals). The documentary https://youtu.be/fpFrfYhJNC8, was selected from hundreds of submissions to be included in the Salt Lake International Film Festival in the USA.

In 2015 Brent, Deon and George were joined by kindred spirit Ange who has previously played Canadian Music Week & SxSW.

In May 2015 Valhalla Lights supported the Baby Animals & the Superjesus in Brisbane & received a massive crowd response to their energetic &melodic live show.

2016 has seen the release of their brand new album ‘My Gracious Highway’, the band’s first album with vocalist Ange Saul.


"Opposite Sides" is a song that “resonates around people broken by the hardship of relationships & its carry over effect into all facets of life…”, along with a particularly quirky filmclip telling a tale of Ange dumping her dwarf boyfriend after she catches him cheating with a band of transvestites!