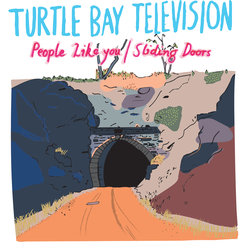 
‘Sliding Doors’ provides a tender examination of the mixed feelings that accompany student farewells. Frontman, Thomas Cockram, became a teacher at an English Language school last year and has become accustomed to experiencing this on a weekly basis. The song establishes a melancholic tones but allows fragments of light to peak through at the edges.

Other tracks by Turtle Bay Television: People Like You
%