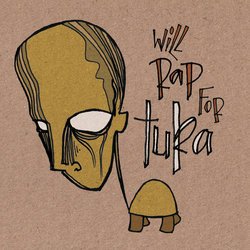 ‘Will Rap For Tuka’ is the culmination of years honing his craft, both in written form and performance, and delivers one of 2010’s most diverse efforts right before the buzzer sounds. Tuka is as comfortable rocking over a stomping Gypsy horn line as he is over Dub-Reggae or a driving Boom Bap rhythm.

A collaborator of the highest order, Tuka has worked and recorded with Chasm, Dialectrix, Two Toes and The Tongue. But for his solo debut, Tuka really has wholeheartedly taken on the ‘solo’ mantle, with only two guests on the entire album – Tenth Dan and Radical Son – and with even the cover art being hand drawn by the Sydney MC.

Tuka’s debut solo set eschews easy comparison and overtly big singles, instead opting for cerebral Jazz and Dub influenced head nodders that tip their hat to producers and projects like early RJD2, Fat Freddy’s Drop, Soul Assasins Volume 1 or Nightmares On Wax. His approach is both highly melodic and rhythmic in nature, and freestyle comes as naturally as composition - he regularly performs entirely improvised sets.


"Tall Poppy: is an upbeat yet laid-back horn and piano inflected tune, that sees Tuka doing what he does best, spitting liquid rhymes with a relaxed confidence built up over years of performing and recording.