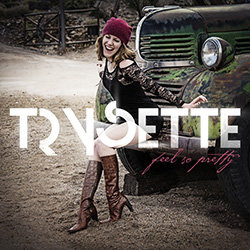 Trysette's new album, Feel So Pretty, featuring an all-star band including Mike Baird (Joe Cocker, Journey), Randy Ray Mitchell (Donna Summer), and Bob Malone (John Fogerty) is set for release this summer in the United States. Currently available for viewing on youtube, it is a fun, fresh and quirky video (of the title track 'Feel So Pretty'), celebrating beauty, female essence and love of life.

A classically trained pianist turned singer-songwriter, Trysette grew up on the northern rivers of NSW, Australia. Her musical tales of love gained, love lost, and the heartbreak that follows, are delivered with an ethereal voice and mesmerizing piano style, leaving audiences transfixed in pin-drop silence. Signed straight out of college by Warner Chappell Music, Trysette began a journey that has led her to become a consummate entertainer and international touring artist.


Other tracks by Trysette: Under My Skin