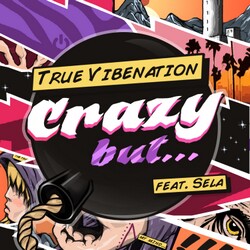 True Vibenation are a rare talent combining youthful enthusiasm with a mature sound and a strong DIY attitude.
Since releasing their debut album ‘The Sunshower Phenomenon’ through Big Village Records, True Vibenation has been going from strength to strength. The album was named as the Triple J Hip Hop show’s ‘Album of the Week’ and snapped up for rotation. On the back of the album’s success and reputation for their live performance, True Vibenation sold out their album launch at Sydney’s iconic Annandale Hotel and toured the country twice, wowing audiences with their infectious energy and a live show which sees them go beyond the traditional hip hop format of two turntables and a microphone and transform into a blasting horn section and live beat making band. With their diverse sound, natural stage presence and killer live show audiences are in for a taste of a group really starting to come into their own with a growing buzz and fan base.


Crazy But... (feat.Sela) is an explosive soulful, electronic track, based on a quote from legendary filmmaker Akira Kurosawa 'In a mad world, only the mad are sane' so what does that make you?. With rich synths, hard hitting vocals and a touch of horns, True Vibenation deliver a musical punch.

Other tracks by True Vibenation: Dressed To Chill feat. Pukz
%