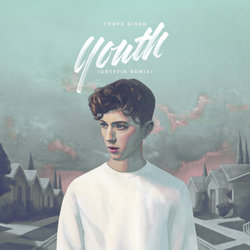 You’ll need a Twitter ticker to keep up with the constantly expanding stats and factoids relating to Troye Sivan’s popularity and swelling international celebrity: For starters, at last count, over 1 million tracks sold, 3.6m YouTube subscribers, 3m Twitter followers, as well as literally hundreds of millions of hits and streams of his videos and songs.
Troye’s first proper EP, 2014’s TRXYE, topped iTunes charts in 66 countries, as well as debuting at #5 on the US Billboard album charts. Last year, Time Magazine named Troye one of the most influential teenagers of 2014. When he announced the imminent release of his Wild EP in August, pre-orders instantly sent the record to the top of the charts in 40 countries including Australia, USA, Russia and Brazil, plus Top 5 in another 25 nations. Its actual release was met with exuberant praise from the likes of Taylor Swift and Sam Smith, while the EP immediately topped the ARIA album charts on debut, and matched its predecessor in reaching #5 on the Billboard album chart.
There can be no doubt: This pixie boy-faced Troye Sivan is a true global contemporary pop phenomenon.


Gryffin’s take on 'Youth' is a classic remix from the young American. He brings his signature melody driven sound with an upbeat Mainroom tempo that creates a real journey when accompanied with Troye’s lyrics.