Troy Kemp & Jayne Denham - Hung Up On You 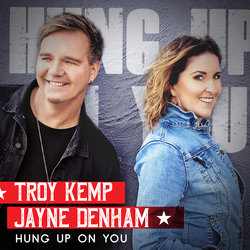 Australian Country Artists Troy Kemp & Jayne Denham have paired up to record and release the catchy new “cross-over” duet, 'Hung Up On You'.

With an incredible three #1 hits under her belt & two Golden Guitar nominations, Jayne Denham has performed at all the major Australian country festivals including CMC Rocks, Deni Ute Muster, The Gympie Muster and in the past two years has been invited to perform in the USA at some of the biggest truck shows in the world including The Great American Truckin’ show & Mid-American Truckin’ Show.


'Hung Up On You' is a song about regrets after a break-up. About a guy who has said some things he wishes he could take back and the girl that is waiting for him to do so. Think of classic duets from the past then add a modern country spin, flawless vocal performances, and a catchy hook.