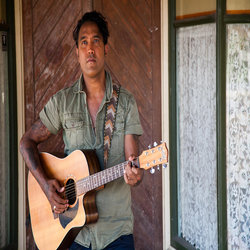 Troy Jungaji Brady keeps cultural fires burning through his lyrics and music, sharing these stories around the world. The Western GuGuYelanji and Birri Gubba songman shares his stories of country, love and law in language and through contemporary music.
Currently touring as a feature artist with Black Arm Band as well as performing as a solo artist, Troy is a constant troubadour. In 2017 he has toured Canada, USA, Hawaii, the east coast of Australia and performed at Brisbane Festival, Quandamooka Festival as well as debuting on the stage with a production by Belvoir Theatre Company.
Outside gigging, Troy works as a mentor creating new art through Australia to empower people through music as a healing and connection tool.
Forging a career over 20 years, he led a number of bands before hitting out on his own, his current music exploring language and connection to the country of his ancestors north of Cairns and Proserpine.
Troy is constantly traversing the line between family and fortune, while keeping simultaneous fires burning by respecting ancient culture and staying strong today.
His work shines with underlying tones of great soul vocals informed by a life of reggae, funk, rock and RnB inspiration.


Based on a trip to the Kimberley, I was sitting with the old people in the dust. They told me about people flying in and trying to make deals on their country. The song asks these big corporations how to regenerate these lands, to give back and not just take.