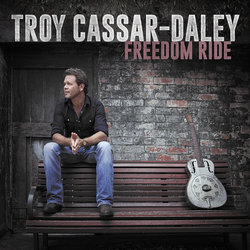 Having spent the best part of 25 years making and spreading his beautiful music around the country andtroy the world, receiving countless accolades along the way including several ARIA and APRA Awards and a total of 27 Golden Guitars to date, Troy couldn’t be more proud of his ninth album:

“Can I say a huge thanks for the support of my new album Freedom Ride. I’m proud of every song on it and it’s been a real honour sharing everyday Australian people’s stories through song. Thanks for looking out of the window of the Freedom Ride bus with me.” – Troy Cassar-Daley

The chart news follows the final concert on the re-enactment of the Freedom Ride tour which saw Troy and Paul Kelly join original Riders and university students on a bus tour to Dubbo, Walgett, Moree, Kempsey and finally Sydney University for the 50th anniversary of Freedom Ride.*

Today (23 March) also marks the release of the second single and title track from the album Freedom Ride (watch the live studio video for ‘Freedom Ride here), following on from the first single ‘Take A Walk In My Country’ (watch video here).


'Freedom Ride' is the second single to be released from Troy Cassar-Daley's ninth studio album of the same name. The Freedom Ride took place in 1965 and saw 29 University of Sydney students visit regional NSW in an attempt to shine a light on the discrimination against Aboriginal people.

Other tracks by Troy Cassar-Daley: Take A Walk In My Country  -  Another Australian Day
%