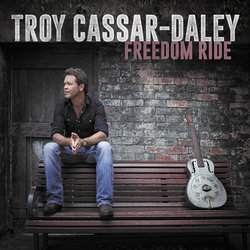 There are few artists who can claim the kind of accolades Troy Cassar-Daley has amassed during his career. A hugely successful artist, loved by country music fans across Australia, he is acknowledged as a true country superstar. He has appeared in film and television and recorded in studios from Tamworth to Los Angeles and Nashville; yet through it all, he remains an unassuming man, deeply committed to his family and to his craft.

Troy is a man who believes profoundly in community and giving back to the industry, shown by his commitment and support to the Troy Cassar-Daley Country Music Indigenous Music Scholarship. A proud member of the Bundjalung nation, he has a true connection to his land and people.

Across his career, Troy has collected a slew of awards, including four Arias, 26 Golden Guitars, two APRA Country Song of the Year Awards, nine Deadlys and four CMAA Entertainer of the Year awards. He has sold in excess of 450,000 albums and received gold and platinum records.


In the words of Troy Cassar-Daley, “This song celebrates our small and big towns, of which I've had the pleasure of spending many a day and night playing country music for people over the last 25 years.”

Other tracks by Troy Cassar-Daley: Take A Walk In My Country  -  Freedom Ride
%