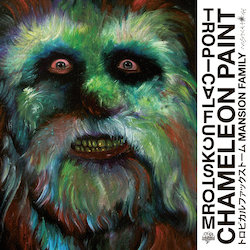 Tropical F**k Storm (TFS for short) is a newborn band formed by Gareth Liddiard and Fiona Kitschin (The Drones). Liddiard and Kitschin are joined by maniacs Lauren Hammel (High Tension) on drums and Erica Dunn (Harmony, Palm Springs) on guitars, keys and other gadgets. Not since John Lydon changed it up from the Sex Pistols to PiL has a curveball felt so bracingly exhilarating.

This limited edition 7” is the first of a series; each 7” featuring an original Liddiard A-side and a B-side cover of “songs we love and wish we had written”. The ‘Mansion Family’ B-side is lifted from Melbourne band The Nation Blue, who released the original less than a year ago. Each 7” will feature phantasmagoric cover art by Montréal artist Joe Becker.

Tropical F**k Storm would like you to meet their debut 7" single, ‘Chameleon Paint’ b/w ‘Mansion Family’, to be released on September 22 as a label collab between TFS Records and Mistletone Records.

Both tracks were recorded in Liddiard and Kitschin’s home studio, Liddiard having practiced practiced the dark arts of recording on previous Drones outings and recent/forthcoming releases by Gold Class, Batpiss and Palm Springs.


'Chameleon Paint’ captures the sense of foreboding that we’re all feeling at this time in history in exquisite detail. “You phone it in / All shame and sin”, Liddiard snarls, as a female Greek chorus howls in collective outrage.