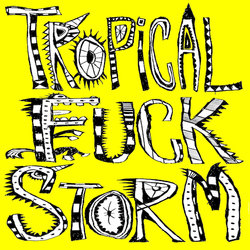 In a world where dissident writers are drawn and quartered, communists wear Rolexes, and Trump drives around with a fridge-full of blood; Tropical Fu*k Storm’s new single is testament to the jester's duty.

In this bare-knuckle ceremony, TFS have made a song and dance of diplomacy’s cheap-suit delusions of grandeur. “They want the glory of a coup de gras!” spits Gareth Liddiard; a broken bottle reminder that General Jack D. Ripper’s red-cap reincarnation is running the show—and how un-satirical this whole joke is.


The Planet of Straw Men revives TFS’s art-punk manoeuvres with a political snarl that pulls your head in, without calling you out. Lauren Hammel’s drums unwind like a sonic mirage of a call-to-battle. The swagger of Fiona Kitschin’s bassline is as insecure as a parliamentary promise. And Erica Dunn’s uncorked guitars frolic throughout the track like a shit-faced fist fight.