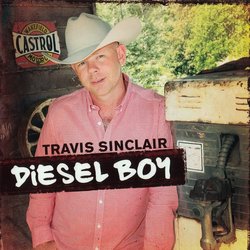 Since entering the world of country music, Victorian singer, songwriter and truck driver Travis Sinclair has had an amazing career. Described as the ‘quiet achiever of country music’, Travis’ highly successful debut album ‘Rhythm of the Highway’ earned him a record ten consecutive Top Ten singles, as well as collecting a host of awards along the way such as the 2003 Country Music Award Of Australia (Golden Guitar) for Best New Talent. His duet with Lee Kernaghan ‘I’m From The Country’ spent three weeks in the top spot on the country charts, which at the time, was no mean feat.

His follow–up albums ‘Rush’ and ‘Diesel Boy’ earned him APRA nominations and a load more accolades, making Travis one of Australia’s most successful country music artists.

Today Travis takes the next path in his career announcing his signing to WJO | Universal Music Australia. "Working with the team at WJO has been an absolute pleasure over the years" Travis states. "Co-owners Will and Andrew go beyond their duties to create a company that has been built humbly (much appreciated) and with much perseverance to go the distance and beyond. Thankyou for the old fashioned service, no technology will exceed this."


The Trucking Industry has seen change in regard to laws and regulations. So much so, that not only truck drivers, all people from all industries and walks of life, are feeling the trials and tribulations. The words of the song say it, not in a proud way only the opposite.