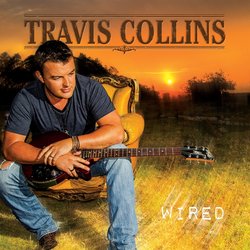 Lead single ‘Curves’ held the top spot on the Country Radio Airplay chart for a mammoth 9 weeks earlier this year, claiming a new record for longest consecutive run at No.1!

Last month, ‘Wired’ achieved a #23 ARIA Mainstream Album chart debut, firmly cementing Collins’ position as one of the most exciting young artists on the local music scene. It’s his most assured release to date, underscoring the rock’n’roll heart Travis Collins fans have come to love, while paying heed to the timeless sounds of classic country: slide guitars, banjo, Hammond organ, dobro, and fiddle.

In 2004, at 19 years of age, Travis Collins was crowned Toyota Star Maker winner, following in the imposing bootprints of stars such as Keith Urban, Gina Jeffreys, and Lee Kernaghan. By the age of 20, Travis had inked a record deal, with a debut album Start the Car to follow in 2005. The following year, the rising star picked up 2 x Golden Guitar nominations, for Male Artist of the Year and Instrumental of the Year. In all, Travis has seven Golden Guitar nominations to his credit, including two for Male Artist of the Year.


It's "...a celebration of my favourite things that make us country… Our boots! They become part of our identity in rural Australia”, said Travis. “It was important to me that I feature the place it came from and the people it's about…….My Town. My story. It's a lot of fun”.