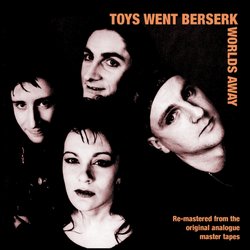 Formed at the end of 1985 - long before Nirvana flung open the industry gates for the indie crowd - Toys Went Berserk achieved little commercial success, yet during their six year lifespan they established a loyal following, both in Australia and overseas, that continues to the present day. Musically on their own in the Sydney scene back in 1986, Toys' sound was often dense and unsettling - but always tempered with razor sharp melodic hooks.

Following their 7” debut "Guns at my Head" the band released a further 5 singles and 3 albums, culminating in "Sensory" (1990) recorded in Boston with Pixies producer Gary Smith at the helm. They also appeared on the ABC's "Stairways to Heaven" CD (from "The Money or the Gun" TV show) and toured the States before calling time in early ’92.

The release of WORLDS AWAY, coincides with the band’s joint 30 year anniversary show with Rarcat at the Factory Theatre, Marrickville, on Fri 14th October. The 4 track EP features highlights from the Rob Younger produced album “The Smiler With A Knife”, cut in 1989 when Toys Went Berserk were at the height of their powers.


Worlds Away is a thunderous and infectious melodic delight, that’s lost none of its sting and vitality over the years. A “world away” in name only! The EP features highlights from the Rob Younger produced album “The Smiler With A Knife”, cut in 1989 at the band's peak.