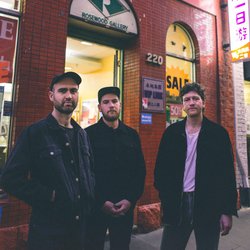 Finding its genesis in Australia's balmy North (affectionately described by McCormack as the country's "sweaty armpit"), Tourist Dollars have since found their nook at the "frigid toes of Melbourne".

Debut single ‘End of Times’ evokes a late-1950s warmth; Roy Orbison springs to mind with McCormack's sombre croon, whilst his fuzzy, reverb-doused guitar recalls Link Wray‘s trademark tone. The track overall is delivered with a smooth ’70s swagger à la Dire Straits, although the end result is not nearly as daggy as it sounds. Tourist Dollars are able to coolly ditch the dad-rock manifesto in favour of something better aligned with the likes of Yo La Tengo, Real Estate and Kurt Vile.

Mixed by Dave Turner (Redspencer, The Delta Riggs) and with Melbourne guitar-pop afficionado Mikey Young‘s personal seal-of-approval (having mastered their debut EP), Tourist Dollars are sure to swiftly stake their claim among Melbourne’s most exciting new acts in 2016.


'End of Times' is the first single taken from Tourist Dollars' forthcoming debut EP, due for release in 2016 via Deaf Ambitions.