Totally Mild - From One Another 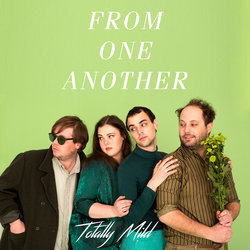 Chapter Music is releasing Her, the second album by Melbourne lush pop quartet Totally Mild, in February 2018.
Following on from their acclaimed 2015 debut Down Time (released on Bedroom Suck in Australia, Fire Records in the UK), Her is a shining jewel of an album. Elizabeth Mitchell’s voice is a thing of unearthly beauty, capable of soaring and swooping in shiver-inducing ways. As a songwriter she is equally arresting, addressing desires and dreams with affecting frankness.
In Totally Mild Elizabeth is joined by guitar magician Zachary Schneider, drummer Ashley Bundang (now Dylan Young in the live band) and bassist Lehmann Smith.
After Down Time’s release, Totally Mild toured UK/Europe in 2015, then hit the US in early 2017, playing SXSW and a string of LA/NYC shows. In Australia they have played Meredith Music Festival and shared stages with the likes of Real Estate, Kurt Vile, Best Coast, DIIV and The Chills.
Across their powerful, delicate, luminous second album Her, Totally Mild move through light and shade with silky finesse.


From One Another, the third single from Totally Mild's new album Her, is a luminous pop gem. Despite the gorgeous, buoyant pop setting, singer Elizabeth Mitchell says "From One Another is about the toxic energy of a relationship that has outstayed its welcome."