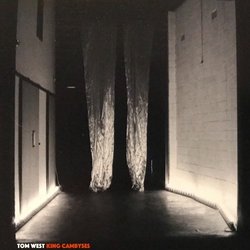 Tom West is an Australian singer-songwriter performing music that traverses the rocky and undulating ground between simple, whimsical folk tunes and grand and moody soundscapes.

Delivering shows where his purposeful songwriting, unforgettable voice and intricate arrangements come to the fore. Effortlessly shifting between performing solo or with his band where banjos, saxophones & guitars complete the ramshackle wall of sound he has drawn comparisons to the likes of Volcano Choir, Andrew Bird, The Lumineers, Of Monsters & Men & Ben Howard.

New single “King Cambyses” is about reflecting on our experience of memory and hindsight affects our experience and understanding of the present. The track, drawn from West’s upcoming album that was composed over a two-year period during which time he was influenced strongly by the sudden and traumatic death of his father & mentor.

West, who will be based in the US for the foreseeable future, and has a 15+ date US tour that’s book-ended by Philadelphia Folk Festival, and sees him finish up at BreakOut West in Canada’s picturesque town of Kelowna. Along the way he’ll perform as part of Americanafest with shows at iconic Nashville establishments, the Bluebird Cafe and The 5 Spot.


This song reflects on the way that our experience of memory and hindsight affects our experience and understanding of the present.
The idea came when I was listening to a history podcast that discussed the story of when, supposedly, King Cambyses, Emperor of the ancient Persian Empire directed an army into the Egyptian desert that disappeared in a sandstorm.