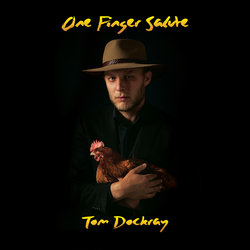 Arguably the greatest old-time blues picker ever to hail from the isle of Tasmania, Tom Dockray is a unique wordsmith and author of song. Dockray regularly treks his National guitar about the American deep south where his music is met with respect and praise.

Closer to home Dockray, along with his band The Dockadoodledoos, mesmerises crowds with the combination of swagger, syrupy vocal and beautiful guitar picking that only comes along every so often.

Two years into his recording career, Tom Dockray is maturing as a songwriter, and following the release of debut EP Iron Suit (2014), he has written his debut long-player One Finger Salute.

Imbued with Dockray’s characteristic wit and knack for observation, One Finger Salute takes aim at the crooked politicians and exploitative businesses perpetuating the social, environmental and economic injustices so often seen in Dockray’s home states of Tasmania and Victoria.

With new record ‘One Finger Salute’ in the crook of his arm and ready for release, Tom Dockray is a name to note down and go see live soon.


Featuring a beautiful guitar part interweaved with an old studio piano and a stunning Tom Waits-esque surprise at the finale, When There's No One Left To Blame is a delightful ode to getting on with things when the chips are down.

Other tracks by Tom Dockray & The Dockadoodledoos: Monopoly Money  -  Mess Things Up
%