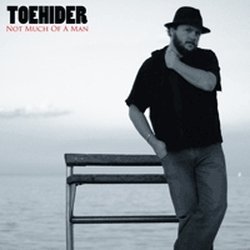 Toehider are Australia's most prolific progressive rock act. Led by Melbourne wunderkind Mike Mills (formerly of Template), Toehider began as a one-man project to release 12 EPs in 12 Months, attracting fans and critical praise from across the world.

In 2011 they will release their eagerly-anticipated debut album ‘To Hide Her’ through Bird's Robe Records and embark on a national run with progressive rock icons UNITOPIA.

The 12 discs might take you a while to get through, but they encompass everything from the weird, wonderful, epic, soothing and everything in between – plus, there’s been a stellar live show to accompany the songs, which saw the band invited to perform at Melbourne’s ROAR festival, Sydney’s Featherfest; and both the Menagerie and Progfest tours.

The lead single from the release ‘The Most Popular Girl in School’ reflects the whimsical epic pop prog the band is famous for – and even better, the single comes with a karaoke version for fans to prepare for the imminent sing-alongs on tour.

You MUST see this band.

“One of the highlights of the entire Menagerie festival” – Music Feeds


The lead single from Toehider's "Not Much Of A Man" EP, a showcase of acoustic and down-tempo numbers inspired by Mike Mills' appreciation of his family, alcohol and youth.

A touching ballad with a gentle delivery and the melodic touch Mills brings to all his work, with a classic hook.