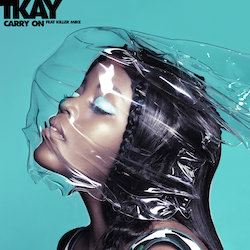 Having already carved a name for herself as Australia’s hottest new musical superstar, Tkay Maidza today unleashes certified monster banger ‘Carry On’, featuring none other than cultural and political icon and one half of Run The Jewels - Killer Mike. ‘Carry On’ is the first official single to be lifted from her highly-anticipated, forthcoming debut album titled TKAY, which is set to shake up audiences worldwide when it is released on October 28 via Dew Process & UMA.

To celebrate the release of the album, Tkay will be playing a string of headline shows proudly supported by triple j, kicking off in New Zealand on Wednesday October 26, before heading out across Australia, including shows in Brisbane, Melbourne, Perth, Sydney, Adelaide and Hobart. Special guests Sable and Midas.Gold will be supporting Tkay on the road for all Australian shows, fan pre-sale tickets available August 31 and general tickets are on sale September 1.

Nominated for Best International Act at the 2016 BET Awards, Maidza recently lent her vocals to Martin Solveig’s chart-climbing single ‘Do It Right.’


On ‘Carry On’, Maidza fires off on her haters and lets loose a whiplash delivery that deftly sets the stage for a head-turning guest verse from Killer Mike who publicly declared himself a Tkay fan multiple times throughout 2015. “The song is about people trying to stop my stride”