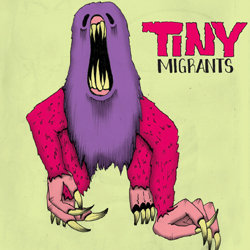 Tiny Migrants hail from Brisbane, QLD and formed several years ago over a mutual love of cigarettes, beer, and warm caramel. They eat warm dinners, enjoy aquatic life and do a majority of their banking online. Though they’ve played alongside an array of native and international acts Tiny Migrants have learnt little and continue to research the music industry through textbooks. Their music is often described as a space cruiser in need of an urgent refuel. Though they are simple minded folk, they often hold their destructive lifestyle at bay for upwards of 30 hours to record albums.

The band have featured on Mere Noise Records’ 2013 singles club, a tribute to the first Nuggets compilation and Australian underground compilation ‘New Centre of the Universe’ and have traded cosmic valuables live with the likes of garage legends Mark Sultan, Ty Segall, Guitar Wolf and Spencer P. Jones. Their debut EP is OUT NOW on PINK 7” Vinyl through Mere Noise Records.