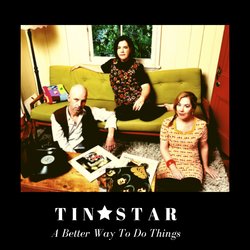 They have been described as the Dixie Chicks meets Bruce Springsteen however Brisbane trio Tin Star can be hard to pin down. Inspired by the folk scenes of sixties Greenwich Village and Laurel Canyon, their strength is the intimacy and passion of three vocals that curl like smoke around each other. Adding guitar, fiddle and accordion creates a sound that many fans believe is its own unique genre; a melting pot of the diverse musical influences of the three members – traditional folk, western swing, alt-country, indie pop and American rock.

They have just released their debut CD A Better Way To Do Things featuring predominantly originals. They pack a punch on first listen but will have you humming them long after you first heard them.

The last two years have seen them performing around the country, predominantly at festivals spanning from southern NSW to far North Queensland, as well as many house concerts, folk clubs and music venues. Late last year they were honoured to be asked to perform as part of Mick Thomas’s (formerly Weddings Parties Anything front man) band The Roving Commission.


I Ain't Leaving Manhattan is written by Dan Grant. It tells the story of not wanting to leave New York to come home because the imagined life of a New Yorker is so much more exciting. It is inspired by Dan seeing one of his musical idols in a guitar show in Greenwich Village and being jealous of his life.

Other tracks by Tin Star: Letter From Your Mother  -  Bulletproof
%