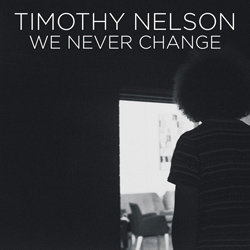 On Words Like Young, his debut solo album, Nelson deftly forges a sound that’s all his own; he has the ability to take straight forward power-pop, alt-country and classic rock 'n' roll and hammer down a sound that doesn’t feel like an exercise in time travel. Diverse, enigmatic, dynamic and refreshingly rebellious, Nelson explores topics of personal growth with heavy introspection.

It’s a record of unquestionably great studio aptitude: a carefully arranged, high fidelity production recorded and co-produced by Dan Caroll at Rada Studios in Perth. And as usual, Nelson is joined on the album by many notable members of his eclectic musical tribe, including Dale Shearsmith, Todd Pickett, Luke Dux, Ryan Dux as well as Dan Carroll.

Words Like Young, out November 4, sees Nelson at the top of his game, reaching new sonic heights while creatively evolving lyrically.


“We Never Change” is a song of self-destruction; both reflective and optimistic. Featuring the vocals of Lucy Peach, the verse feels so delicate it could shatter at any moment, however once the chorus kicks in, We Never Change packs a punch.